Amphitheater is a center for theatrical presentations, lectures, demonstrations, music and times of quiet reflection.
The photo shown exemplifies our plans for an amphitheater designed to blend in with the natural environment of the Island. The photo is of the amphitheater located at Swarthmore College.

INTERNATIONAL WATER WHEEL
Guests are invited to spin the huge “International Water Wheel. The spoke that stops at the top-middle, triggers a 45 second video illustrating a water issue of the nation assigned to the spoke.

These images illustrate examples of issues that could be featured on the films triggered by a spin of the waterwheel: 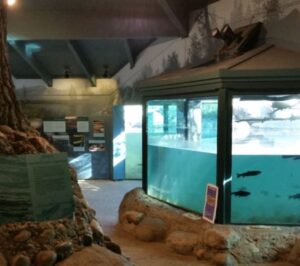 Aquarium-Like Windows
Guests are simultaneously immersed into the real freshwater lake and the tidal Delaware River without the need for a mask and snorkel, when they look through a panel of aquarium-like windows in an underground room located within the narrow piece of land that separates the river and lake. This vision is inspired by the Stream Profile Chamber located at Taylor Creek in the Lake Tahoe CA area. We are investigating the feasibility of building a similar underground room in a way that does not compromise our ecological standards.

FESTIVAL GROUNDS IN HONOR OF CHIEF ROY CRAZY HORSE
The movement of dance and the beat of a drum moves the spirit at the Festival Grounds. 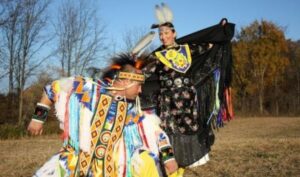 The sacredness of water and the interconnectedness water has of all life, is deeply understood by the original peoples of the Americas. It is fundamental to each of their diverse cultures.

In honor of the memory of Chief Roy Crazy Horse, who was Chief of the Powhatan Renape Nation and founder-leader of the Biannual American Indian Arts Festival held at the former Rankokas Indian Reservation, the festival grounds will serve as a forum where indigenous groups from throughout the Americas teach the public about their culture, past and present. It is hoped that these grounds can further the work that Chief Roy Crazy Horse started to promote a greater understanding of the rich cultural heritage of the American Indian.

There will also be a special area dedicated to the Lenni-Lenape, whose history at Burlington Island dates back thousands of years.

We expect the grounds to be located in an open field where the ceremonies of the NJ American Indian Alliance were held around 2007-2013. Roadside International, whose founder served as Spiritual Leader for the Powhatan Renape Nation, has begun plans for its operation, along with the recruitment of Native American craft artisans.

The Island Waters Institute invites tribal communities and indigenous organizations to participate and when possible, own and operate venues. We will be seeking the informed consent of all of our initiatives on the island from the New Jersey State Recognized Tribes and the NJ State Commission on American Indian Affairs.

Guests watch and learn how artesian well water can be made for human consumption at the Island Waters Water Center where water is drawn and bottled in glass, pottery and ceramic artwork. Guests can sample and purchase Island Water and the reusable and collectable containers made within studios found along the Water Exhibition Trail.

Quality of Water. The sand lying beneath Burlington Island creates a natural infiltration system bringing up what the Trenton Evening Times reported July 18 1952 as, “perfectly pure” water that comes from the Delaware River. The newspaper was reporting about the city’s discovery of the filtered Island water and how the city expected to save money by using it to supply the city’s water needs, instead of using the water they were getting from the Delaware River which required expensive chemical treatment to make it safe for human consumption. By 1954, the city’s water supply came solely from the Island to the city via five artesian wells and pipes located under the back channel of the Delaware River. In 1978 the city shut down the artesian wells reportedly because of the inconvenience of having to travel by boat to service the wells. By all accounts, the water coming from the Island was tastier. It was treated only with chlorine, though the city’s consultants claimed that the chlorine was not necessary for safety, but necessary to comply with state law. The Island Waters Institute will test the water and build new artesian wells conforming to updated state law for both well structure and drinking water requirements.